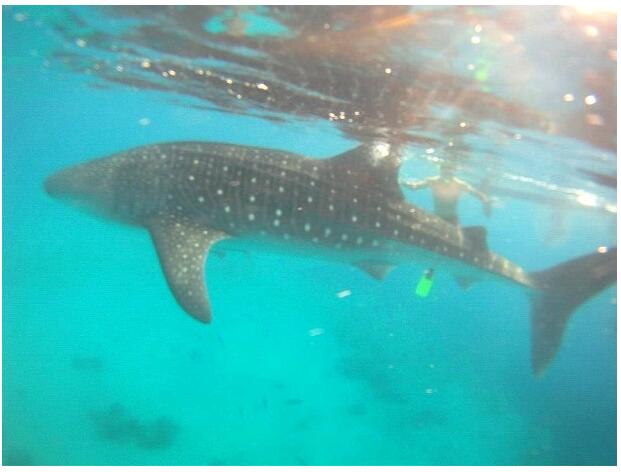 Imagine there is a place in this world where you simply put on your flippers, wade into the sea, after a few vigorous swims, you see a lepopard shark resting under you , a turtle looks at you curiously and takes a few laps with you.

Do not exist, you think.

Oh yes, in Western Australia on the Ningaloo Reef – one of the most beautiful diving areas in the world, which its reputation as one of the last marine paradises on earth precedes it.

The Ningaloo Reef stretches over 250 kilometers along the coast directly near the shore of the Australian state of Western Australia.

In many places the reef is barely a hundred meters from the mainland and numerous species such as turtles, dugongs, sharks and rays can be observed directly from the shore.

In March of each year shortly after the full moon, visitors to the Ningaloo Reef can admire the “mass spawning”, the spawning of the corals that the Australians affectionately call “Sex on the reef” .

Between June and November, humpback whales pass the coast, the sight of which I had already got used to after my months of voyage past Australia’s wild coast .

But the absolute highlight are the mighty whale sharks , which hang out every year between May and July on the coast of the Ningaloo Reef and filter plankton with their mouths open.

The animals can be up to 20 meters long and are definitely among the most imposing creatures on earth. Although our whale sharks were “only” around five meters long babies, swimming with the gentle giants offers pure thrills.

In the tranquil village of Exmouth , glass bottom boats, diving and snorkelling trips to the reef are offered in every corner with the guaranteed promise of at least one whale shark in nature and live . Otherwise the money will be given back.

A little skeptical, I booked one of the tours and asked myself how a guarantee would lure the largest fish in the world under a small boat . A trip out to sea later I realized how the tour operator was tracking the animals on the sea. A helicopter radioed the coordinates of the whale shark sightings to our boat, which then drove to the location in no time at all. Then everything had to go very quickly.

Whale sharks a hand’s breadth in front of me

We were divided into groups, put on our gear and hopped into the sea in groups. Organized chaos , like just before the presents in kindergarten, everyone was looking forward to the upcoming spectacle. I stuck my head in the water and right in front of me the gigantic fish passed us majestically. The whale shark seemed to be heading straight for me and I was overwhelmed and forgot to swim away to the side as it was arranged before.

Maybe the good-natured fish will decide, given my 60 kilograms, that plankton is not that tasty after all, I thought and swam away from the giant with a fit of panic. He seemed interested to check us out and came closer and closer, only to then slowly dive into the depths. What an experience that was repeated a few times that day.

Floating so close to such an imposing animal was definitely one of the most intense experiences a diver can imagine, even if, in view of the professional location of the companies on site, some also note that the poor animals are disturbed in their foraging, which, however, is not should be the case. After all, rangers ensure that certain standards of the Ningaloo Reef Marine Park are met.